Sleep is a 1st level area-of-effect spell from the basic rules. It’s available to bards, sorcerers, and wizards, as well as paladins who take the Oath of Redemption, and warlocks whose patron is The Archfey. This spell takes an action to cast and renders creatures in an area unconscious.

The area of effect is centered on a point within 90 feet of you, which is a fairly long range — about the length of a typical ship’s deck, or the height of a 9 story tower. Sleep definitely seems designed to be cast from a safe distance. It affects creatures within a 20 foot radius, so you can cast it on targets up to 110 feet away. They can even be behind total cover as long as you have a clear path to the point of origin. The area of effect is notably the same as that of a Fireball, or about the volume of a quaint inn.

For example, if there are 4 goblins in the area of effect with 7 hit points each and you roll 23 on your 5d8 then three of the goblins fall unconscious, as they have a total of 21 hit points. You’d need to roll at least 28 to affect all four goblins.

This is a very powerful effect, and it lasts for a full minute, which is 10 rounds. However, the effect ends immediately on a creature if it takes any damage or if another creature uses its action to wake it.

Sleep is really good against groups of low-level enemies. With a 1st-level spell slot you can immediately reduce the number of combatants on the battlefield, sometimes by a lot. Ambushed by a pack of four wolves? Put two of them to Sleep, and now you only have to deal with two wolves. Need to get past a pair of guards? Cast Sleep from a safe distance and then walk right by them. Charged by a knight on a warhorse? Put the horse to Sleep and watch the knight tumble to the ground.

Sleep is very effective against enemies up to CR 1/2. That means kobolds, goblins, hobgoblins, orcs, most animals, and common folk such as bandits and guards. It’s also quite effective against injured enemies.

Attacks against sleeping creatures have advantage, and all hits are critical hits. Once the bard has put the group of bandits to sleep, send in the rogue to slit their throats one by one.

Sleep is completely useless against undead and constructs. So if you’re going up against groups of zombies or skeletons, prepare something else and bring a cleric. Elves are also immune to this spell.

Another thing to watch out for is that everyone in the area of effect is affected, including allies. So be careful casting this spell in mixed company and be sure your allies have more hit points than your enemies.

Sleep does not really scale well. By the time you get to 4th level, you’ll be facing enemies that have more hit points than you’re likely to roll on 5d8. The spell does allow upcasting, but this is very weak. A 2nd level slot will let you roll 7d8, which may be enough to put a single CR 1 creature to sleep (for example, a bugbear or a tiger). Once you’re dealing with CR 2 monsters like ogres or gargoyles, they’re likely to have enough hit points so that you’ll need a 4th-level spell slot to have better than a 50% chance of affecting even one of them.

Still, as your character gains levels, you’ll find less and less reason to prepare Sleep as it falls behind other spells in power level.

5d8 has a normal probability distribution and the average roll is 22.5. You can expect to put about 5 hit dice worth of creatures to sleep. That’s roughly 3-5 kobolds: 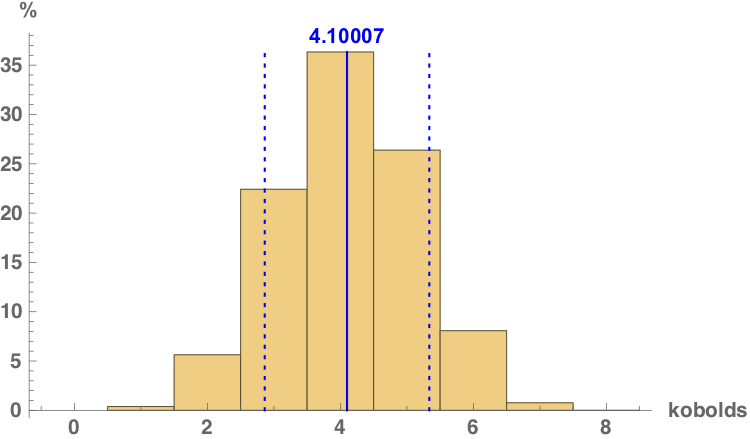 The blue solid line on top of the histogram shows the average number of incapacitated kobolds. The dotted blue lines show one standard deviation.

You can expect to incapacitate 2-4 goblins: 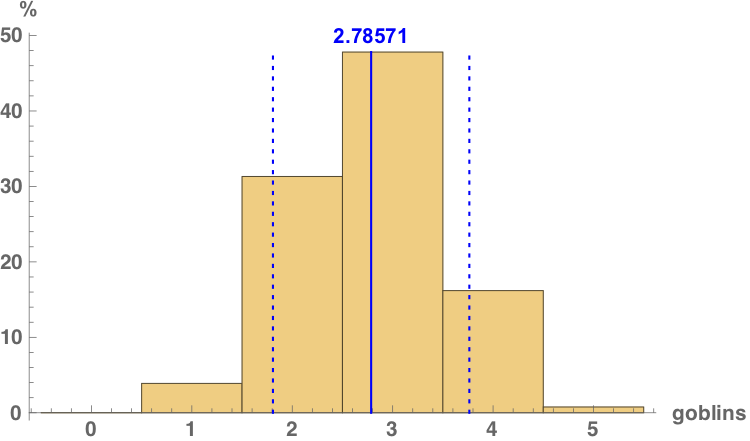 One or two wolves: 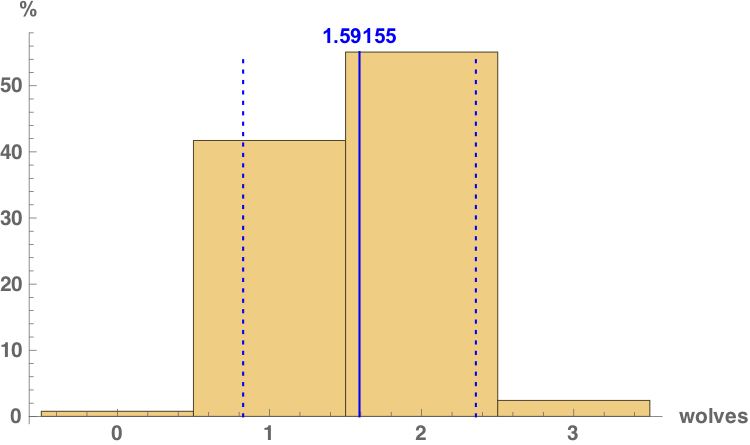 Or a single orc: 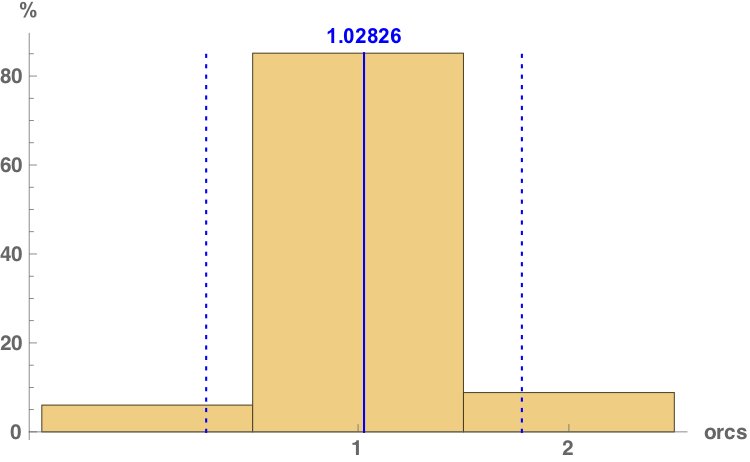 Note that below CR 1/2, it’s exceedingly unlikely that the result of your spell is “nothing happens”. Even with CR 1/2 orcs, you have only a 5% chance that the spell will do nothing. The probability of no effect jumps drastically when you go to CR 1 creatures. For example, you have less than a 23% chance of being able to put even a single bugbear to sleep. CR 2 creatures like ogres and gargoyles generally have more than 40 hit points, making this spell totally ineffective against them unless they’re injured or you cast it with a higher level slot.

Here is the full probability map for Sleep cast at 1st level: 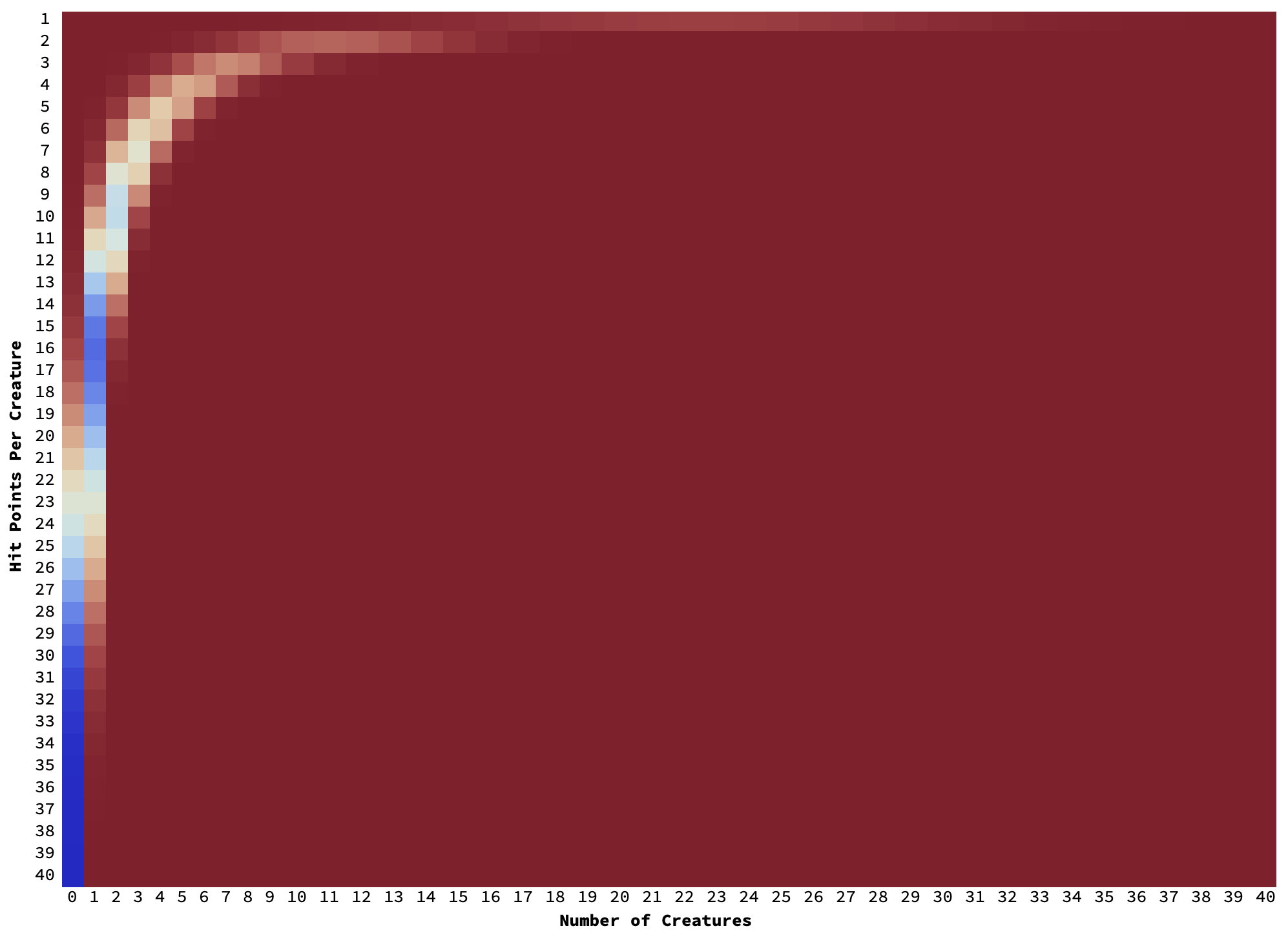 The sweet spot is where creatures have fewer than 20 hit points, and you can see that the effectiveness drops off exponentially as hit points increase. Because of this exponential curve, if you cast Sleep at a group of owlbears, even if you cast it at 9th level, then 99 times out of a hundred only one of them will be anaesthetized. That’s not a great use for a 9th-level slot.

Compared to other spells

Sleep is unique in that it’s a 1st-level spell that can incapacitate multiple enemies without a saving throw, and without requiring your concentration. Compare it with Tasha’s Hideous Laughter, which is a 1st-level spell that can incapacitate a single enemy, requires concentration, and doesn’t work on creatures with an Intelligence score of 4 or lower (thus it won’t work on most animals, for example). Even so, Tasha’s Hideous Laughter remains a good use of your 1st-level spell slots long after Sleep stops being useful.

Color Spray works similarly to Sleep and is also a 1st-level spell, but blinds creatures instead of rendering them unconscious. The duration is only 1 round, compared to 10 rounds for Sleep.

Suggestion is a 2nd-level spell with a range of only 30 feet that can be used to take one enemy out of the fight, but takes your concentration.

Hypnotic Pattern is a 3rd-level spell with a similar effect to Sleep, but allows the affected creatures a Wisdom saving throw and requires your concentration. Hypnotic Pattern is probably the most obvious replacement for Sleep as you level up.

Hold Monster comes online when you get 5th level slots (at character level 9 if you’re a wizard), affects one creature which gets a saving throw, and takes concentration. It can be upcast, so you can hold two monsters using a 6th level slot and up to 5 monsters with a 9th-level slot. Hold Person is a weaker, 2nd-level version of this spell which only works on humanoids.

At spell level 6 (wizard level 11), you get spells like Irresistible Dance and Eyebite that let you disable enemies. But again, these spells take your concentration and give the targets saving throws.

Sleep is a uniquely powerful crowd control spell for low-level characters, but quickly becomes irrelevant as you level up.